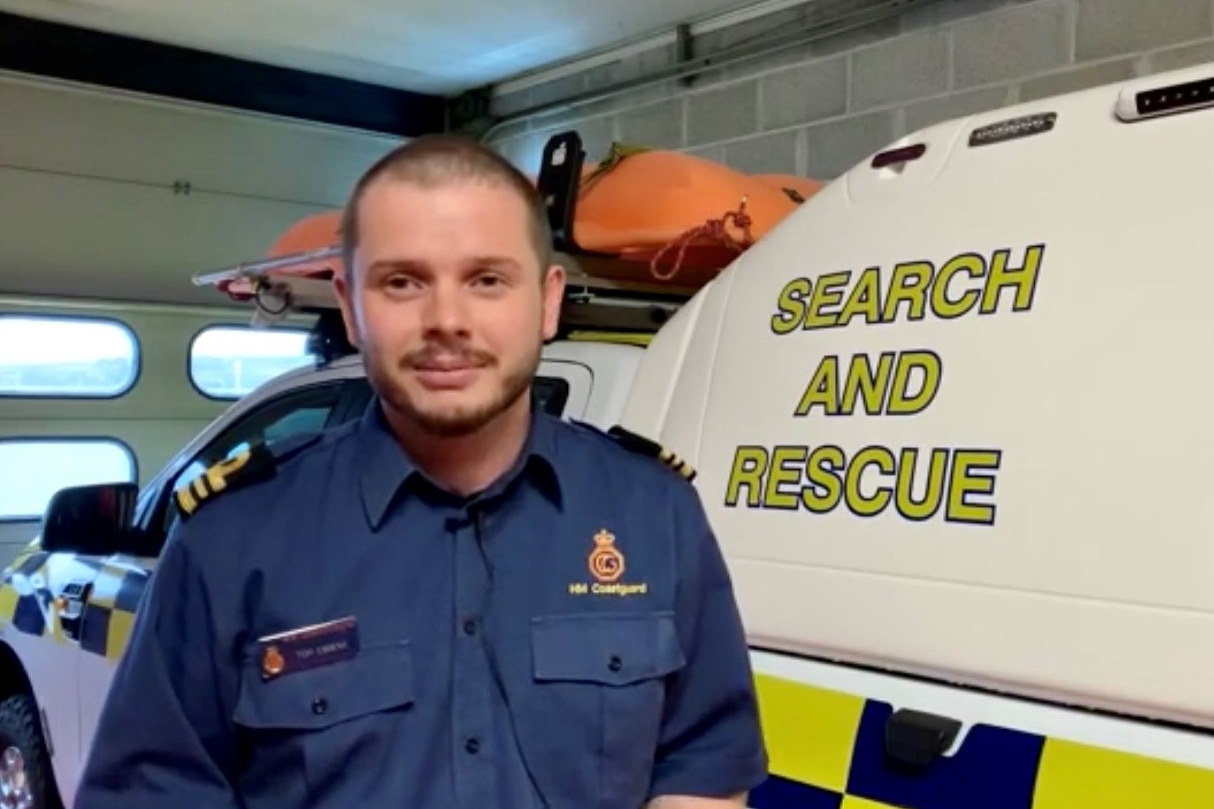 Tom Ebbens, a senior coastal operations officer for the Coastguard, remembers the moment that his life took a new direction. It was May 2017 and he was with his wife, Demi, in Cornwall, driving home from ASDA. A news report came on the radio, about the recent bombing at Manchester Arena.
Tom wondered if there was anything he could do, which of course there wasn’t, but at that moment in the car he began to consider his faith and question how he could apply his faith to help others.

“I remember thinking, perhaps I could be an army chaplain”.
On that drive home, Tom remembers how the word ‘chaplain’ kept swirling around his head, and then, in a moment of realisation, he said; “The Coastguard doesn’t have a chaplain”.
It might seem odd that this wasn’t his first thought, especially given that Tom was already working for the Coastguard. But, perhaps, he dismissed the idea on a subliminal level, because he knew that the Coastguard didn’t have any chaplains, and they never had.

Fast forward one year and Tom had gone through a discernment process, to become ordained, with the Diocese of Truro. He was accepted onto the course in 2018, which he would undertake in his spare time whilst also continuing his job in the Coastguard.

During the early stages of his training, Tom made it his mission to fulfil his idea of setting up a Coastguard chaplaincy, a significant undertaking for anyone, let alone for someone who had yet to be ordained. But there was an even bigger hurdle to overcome. How do you convince the Coastguard to establish a chaplaincy, when they had no history of having one?
Well, in September 2019, through Tom’s faith and the cooperation and understanding of the Coastguard, a little piece of history was made, when Tom was tasked with establishing a multifaith chaplaincy for the Coastguard.

Tom still works as a senior coastal operations officer and manages this role alongside his chaplaincy. “Tiny steps” is how Tom describes it; “It’s a learning process for both myself and the coastguard.”

In the time since setting up the chaplaincy, Tom has seen it grow from a point when no one was aware of there even being a chaplaincy, or even what a chaplaincy was, to now getting calls from people from all over the country. Social media and news letters are used to good effect, but Tom is keen to point out that the underlying message that he always aims to convey is one of ‘trust’.

The chaplaincy is tiny compared with other organisations such as the army, police and the NHS, but it’s come along way in just a couple of years, thanks to Tom’s vision and some ‘trust’ from the Coastguard.

Tom can be contacted useing the following:

Hot on the heels of our Vacancy directory, we’re about to add a directory for Events. Our aim is to provide a comprehensive list of chaplaincy related events for the UK. Events could include training sessions, conferences, webinars and more.

Chaplaincies who are planning an event can submit it for inclusion in our directory, which will be launching on 15 February 2021, just a few days away.

All you need to do is email Chapains UK (contact@chaplains.co.uk) with the following information:

We look forward to hearing from you.

We’re mixing it up a bit. Chaplains UK is for Chaplains of all faiths which is why we want our next article to be about the work of a Non-Christian Chaplain. If you are, or if you know of someone who is doing some great work or has a story to tell about their vocation, then please email us at contact@chaplains.co.uk

When lockdown began back in March, many people in employment were able to make the transition to working from home. But for the thousands employed in theatres across the country, any chance of being able to work, either from their normal place of work or at home, disappeared overnight when venues had to close.

It’s not unusual for people in the theatrical world to find themselves
without work on a regular basis. To some, it’s almost routine, working on a temporary contract for a few months and then moving on to the next. But with the arrival of Covid, there are no ‘next’ productions to move on to.

The Revd Lindsay Meader (below) is the Senior Chaplain for Theatre Chaplaincy UK. She is based in the West End of London, in the heart of theatreland.

Lindsay’s remit is to develop theatre chaplaincy in London and potentially to roll out the model across the country. She says; “The industry has been desperately hard hit by this pandemic. Over 70% of its workforce, which includes actors, stage hands, sound and lighting technicians, costume designers, dressers etc are freelance, and many do not qualify for the furlough and self employed support schemes.”

The temporary nature of the work means that many have fallen through the cracks of the government’s financial support systems. Lindsay goes on to explain that the issues go beyond financial concerns. The transitory aspect of working in the theatre means that people are often many miles away from close friends and family, often living in short term accommodation, sharing with relative strangers. “They simply don’t benefit from the type of personal support network that helps the rest of us to cope in times of stress and isolation”

Even in normal times, anyone who embarks on a career in theatre knows they are signing up for a life of insecurity. Coping with the precarious nature of the job is tough at the best of times, but the impact of the pandemic has made the work of the Theatre Chaplaincy all the more important.

Lindsay organises numerous online meetings for those who know what it’s like to be in the same situation. One such meeting, aptly titled ‘The Green Zoom’, meets every Wednesday at 4pm on…. Yes – Zoom. It’s a safe online space for those who work in the theatre industry, or who did before lockdown, to come together to share stories, support, console and encourage each other. And maybe share a laugh or two.

Lindsay is fully aware that being a Chaplain comes with its own stresses and strains; “It’s hard not to take on other people’s problems when you care about them.” For this reason, Lindsay has a mentor and also a spiritual director, who, in her words; “keep me on track with my wellbeing and my own relationship with God.”

Find out more about Theatre Chaplaincy UK at www.theatrechaplaincyuk.com

Points to consider – Not in order of importance

After some considerable thought we’ve decided on a simple line that defines our reason for being. It will serve to focus our thought processes and actions in everything we do.